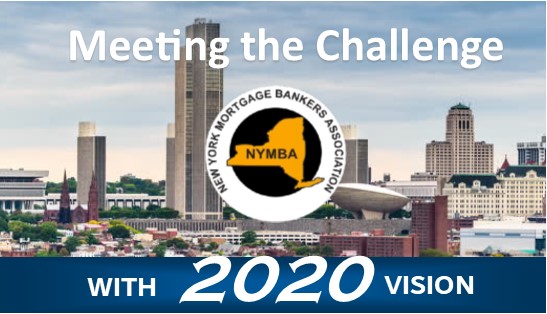 New York MBA is holding a series of Webinars to engage members, share information and discuss the current lending environment. All members are invited to attend, and all employees of member companies are eligible to attend for free.

Future members are able to attend one complimentary webinar session. Additional sessions can be accessed for a nominal fee. Future members can join New York MBA at any time by going to our membership page or by clicking here.

New York MBA addresses all facets of the real estate finance industry including Branch Licensing, Originations, Processing, Underwriting, Closing, Compliance, and Loan Servicing. In addition to sessions that will address current top-of-mind topics, there will be an ongoing tract of Loan Servicing Webinars that will kick-off on September 23rd at noon with:

Restoring zombie properties for New York municipalities and consumers is paramount.   This event provided a starting point positive discussion on revitalizing communities with experts in the fields of fast-track foreclosure law, property preservation, mortgage loan servicing as well as elected officials and community stakeholders.  Neighborhood reinvestment and tools to rehabilitate properties in New York were explored in this 1/2 day workshop for those interested in improving communities throughout New York. 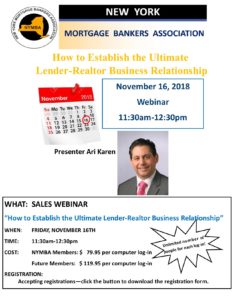 The Bureau of Consumer Financial Protection (Bureau) is amending Federal mortgage disclosure requirements under the Real Estate Settlement Procedures Act (RESPA) and the Truth in Lending Act (TILA) that are implemented in Regulation Z. The amendments relate to when a creditor may compare charges paid by or imposed on the consumer to amounts disclosed on a Closing Disclosure, instead of a Loan Estimate, to determine if an estimated closing cost was disclosed in good faith.

The Bureau understands that these circumstances have led to uncertainty in the market and created implementation challenges that may have consequences for both consumers and creditors. If creditors cannot pass increased costs to consumers in the specific transactions where the costs arise, creditors may spread the costs across all consumers by pricing their loan products with added margins. The Bureau also understands that some creditors may be denying applications, even after providing the Closing Disclosure, in some circumstances where the creditor cannot pass otherwise permissible cost increases directly to affected consumers, which can have negative effects for those consumers. For these reasons, in July 2017, the Bureau proposed to address the issue by specifically providing that creditors may use Closing Disclosures to reflect changes in costs for purposes of determining if an estimated closing cost was disclosed in good faith, regardless of when the Closing Disclosure is provided relative to consummation (2017 Proposal or “the proposal”).  The Bureau is finalizing those amendments as proposed, with minor clarifying changes. To view the complete ruling, click here.

On Apr. 26, MBA submitted comments on the Consumer Financial Protection Bureau’s Request for Information on Civil Investigative Demands. MBA’s comments communicated many of the industry’s concerns with the CID process. In addition to offering comments related to the CID process, MBA reiterated its support for a broad reexamination of Bureau practices as detailed in MBA’s CFPB 2.0: Advancing Consumer Protection white paper.

CIDs are used by the Bureau to request information that may be relevant to a potential violation of consumer financial protection law. Responding to a CID is a very burdensome process that can involve significant resources and reputational harm. The letter describes aspects of the current CID process that are unfair, including the overly broad notification of purpose statements, the low threshold of initiating an investigation, the inadequate CID challenge process, and the unrealistic timelines. These and other aspects of the current CID process contribute to an imbalance between the Bureau and CID recipient that’s contrary to due process protections. The comment letter offers suggestions to correct this imbalance in a way that recognizes the costs and reputational risks to CID recipients. 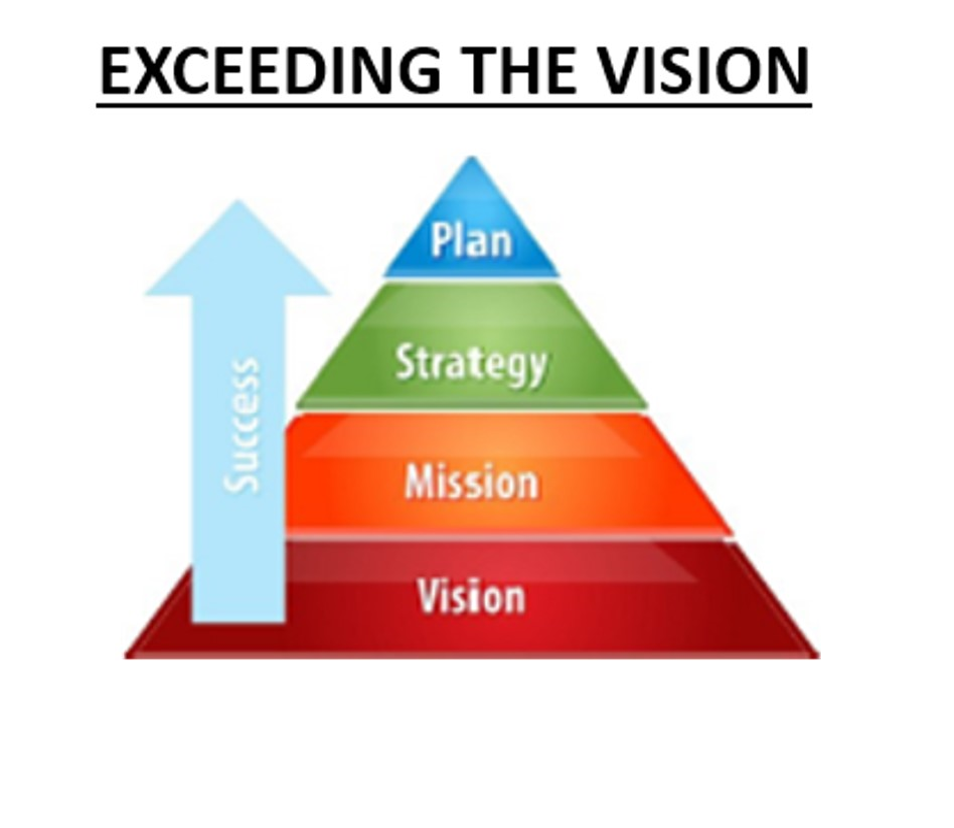 We had a great event at the 2018 “Exceeding the Vision” Annual Convention!  Great speakers, relevant topics and prime networking opportunities.  Check it out–we had a blast!

Click here to see some highlights of the 2018 Convention in Albany.

If you’re not a member of Mortgage Action Alliance, you’re missing out on an opportunity to participate in the law making process and have your voice heard!

“MAKING A DIFFERENCE TOGETHER”

Be a part of shaping the future of your business!
Your involvement can make a difference!

Throughout his two decades in real estate lending, Michael Galligan has blended business skills, regulatory knowledge, and consumer satisfaction. He serves as Manager of Compliance and Quality Control at CAP COM Federal Credit Union and is a Mortgage Bankers Association-certified Mortgage Compliance professional. Galligan’s areas of expertise include laws and regulations impacting financial institutions and mortgage entities. Prior to joining CAP COM in 2013, Galligan served in a number of lending and banking roles he worked as Loan Operations Manager, Assistant Vice President for Legacy Banks in Pittsfield, Massachusetts (now part of the Berkshire Bank family).

Patrick worked as a residential mortgage banker for a large regional financial institution for 15 years. Having been a successful retail loan originator, he understands the importance of the lender/realtor relationship and helped create LenderLogix from a banker’s perspective. Patrick has a passion for process improvement and led initiatives to bring efficiencies to the mortgage process. He’s advised on several major LOS implementations and consulted throughout design, testing and implementation. Patrick is a graduate of the University at Buffalo and lives in Buffalo, NY.

Steven A. Milner has nearly 4 decades of experience in the Mortgage Banking industry having started his career as a Loan Officer in 1981 in New York on Long Island. Currently, Mr. Milner is the Founder and CEO of US Mortgage Corporation, an Independent Mortgage Banker licensed in 47 States and Washington, D.C. which he founded in 1994.

In 1994, Mr. Milner made the decision to start his own Independent Mortgage Banking Company and founded US Mortgage Corporation on February 1, 1994. Mr. Milner as CEO oversees the day to day operations of US Mortgage Corporation. The company, headquartered in Melville, NY has over 260 employees and in 2017 will originate over $1billion, 82% of which is Purchase Money. Moreover, Mr. Milner is a Licensed Mortgage Loan Originator in 50 States and Washington, D.C. The company has proven its lasting power through volatile market cycles by following its Core Value “Seek Longevity” and making strong critical decisions, including not funding Sub-Prime loans as a Mortgage Banker before and after the Financial Crisis of 2007. In his career he has originated over $4 billion and continues to  personally originate in excess of $4mlllion per month.

US Mortgage Corporation is currently a Fannie Mae Seller Servicer with over 25 Branches. His employees all believe in the value of helping people attain the dream of Home Ownership. As such, Mr. Milner has consistently focused on making education the key cornerstone to helping home buyers attain their dream of homeownership.

Greg has 30 years experience in Multi-Unit restaurant management with International restaurant companies as well as over 15 years as a Mortgage Originator. He is the current President of the Central New York Mortgage Bankers Association. He also is on several industry related committees.

Jodi Gaines is the Chief Client Relations Officer and EVP of Business Development and Government Relations of Insight One Solutions.  Insight One Solutions is a family of companies that consists of Sortis Financial, MSI, IProperty Claims and Williams & Williams Auction.  Prior to joining Insight One, Jodi co-founded and started Claims Recovery Financial Services, LLC “CRFS” at her kitchen table.  CRFS specializes in Government, GSE and PMI Claims and Loss Analysis.  Prior to CRFS, Jodi spent 14 years at North American Mortgage, Dime Savings and Anchor Mortgage.  Jodi is on the Board and Executive Board of New York MBA and serves as the NYMBA Loan Servicing Chair.  Jodi is the co-chair the MBA Claims working group and participates on the MBA LAC and Property Preservation Committees.  Jodi is the Co-chair Five Star’s American Mortgage Diversity Council “AMDC”.  Jodi is on the Board of United Way of Orleans County and serves as the Allocations Chair.

Starting as a Mortgage Banker and then moving to the Banker Training Team to lead Quicken Loans’ effort for the development, regulatory approval and implementation of its licensed training curriculum, Wendell Robinson has been with the Quicken Loans Family of Companies since 2010. In 2019 he moved to the Government Affairs team and assumed his current role leading the 50 State Group as Senior Director of Government Affairs in August 2020. Beyond his focus on lobbying and organizational relations, Wendell’s national portfolio includes Licensing, Compliance, Education and Tax. His professional background includes responsibilities as a business owner, manager, writer, advocate, and project leader.  Immediately prior to coming to Quicken Loans, Wendell led an advisory consultancy serving professional athletes, as well as the entertainment and political arenas.

Wendell’s wife Kathleen, a pastry chef has appeared on the Food Network and the Cooking Channel. Together they own the pink Bandana Bakery in Mentor, Ohio where they reside with their daughter Paige.